Meet Olivia, Aka "Ollie".  Ollie is a six month old pygmy pot belly that came to live at our farm after her previous owner contacted us concerned about Ollie's safety.  They had a large dog that was very jealous of Ollie and became resentful of her joining "her" family.  As well, the next door neighbour also had two large dogs that desperately wanted to have pork for dinner too.  Ollie's previous owners contacted the SPCA and asked if they would be able to help her and they referred her to us. 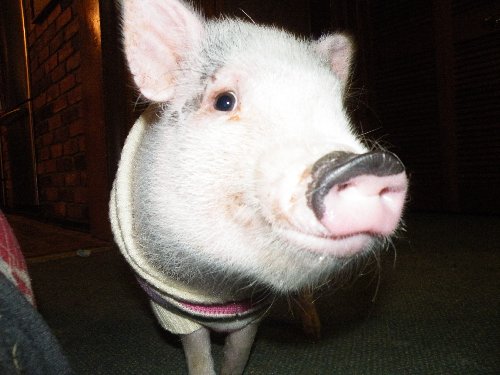 Ollie lives in the house with us and enjoys spending her days lounging on the furniture and sniffing the floor in hopes of finding crumbs to eat.  She likes to park herself under the table where the cats eat in hopes that the odd kibble may fall down.  The day she figured out how to open the pantry door with her nose was the day we had to move all the cat & dog food to the back room, as well as move all the edibles up from the bottom shelves. 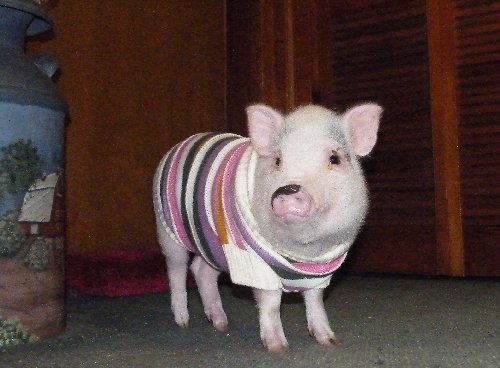 She is a smart little girl, she is litter trained and at first we were giving her treats when she would use the litter box but then each time she wanted a treat she would run into her litter and stand there for 10 seconds and then run over to us for a treat, what a little trickster.The other day she knocked over a pail of dog kibble and pulled the lid off, my Husband Barry caught her in the act and scold her, she ran into her little soft crate because she knew she had been bad.  I came into the room and asked Barry what she had done and as we were talking about her and what she had done we were watching her and she was pretending to be asleep.  We knew she was faking and when we stopped talking for a minute she peeked one of her eyes open, we said her name again and she quickly closed her eye and pretended to be sleeping again.  This went on for about five minutes and what a laugh she gave us, little bugger!